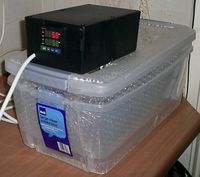 The cooker in situ above a water bath

The sous vide setup mk 1 is good for gettng started, but it's limited in the amount of food you can cook in it. A larger-volume sous vide cooker is easy to make but a bit more involved. The cooker unit contains heating elements, a thermocouple, the temperature controller, and an aquarium pump (to mix the water). The whole lot is in a single box, ready to be placed on the edge of any convenient water bath.

Make magazine has a good description of how to make such a cooker. However, not all of the parts are easily available in the UK, so some modification was needed. Here, I give some hints and tips on how I made my cooker. You'll need to read the original project description for these variations to make sense. 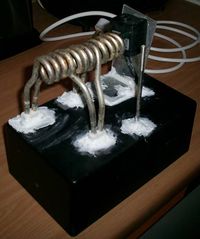 The underside of the cooker, showing the arrangement of the parts that go into the water

All the pumps require an additional power supply.

Inside the box, showing a rats' nest of wires

Wiring for the cooker

The wiring mostly follows from that in Make. A solid-state relay (SSR) controls power to the heaters. The SSR is controlled by the TET-612 controller with input from the thermocouple. The pump is permanently on while power is supplied to the unit.

The connections between the parts are made via screw-down connector blocks. After making all the connections, cover all the terminals with insulation tape to prevent accidental short circuits.

Make sure all wires and connectors can take the load: the heaters will draw 1500W at 240VAC, so the unit as a whole could draw over 7A.

Press set, enter the passcode 0089, and set up the controller parameters as below.

The TET 612 is a PID controller and its parameters need to be tuned to control the cooker effectively. The easiest way is for the controller to self-tune by pressing and holding the '>' button until the display flashes.

You will need to set the 'SouF' and 'ot' parameters before doing the tuning.

The controller will move the water temperature above and below the target three times, so it could take up to an hour to do.

To examine or manually adjust the parameters, press set and enter the passcode 0036. Should you be interested, these are the parameters I have.

The C-clamp style attachment is a more convenient way of securing the heater, as well as allowing it to be used on different pots. But, as I said above, I'w wary of using perpex to hold the cooker stable, as its large, heavy, and perspex weakens in higher temperatures. I'm investigating using a piece of aluminium as a clamp instead.